Preface to The Truth about Infant Formula

I have been asked to share the information about formula and advertising that I presented at a recent conference concerning infant formula and how it is marketed in our Western Culture. This will undoubtedly have to be a multi-part series, so let me begin with the Preface.

Scientists, doctors, nurses, medical professionals--all agree and validate the fact that breastmilk is not only the ideal food for infants, but also that children can experience sickness and disease if it is withheld from them, yet, mothers still turn to formula as a legitimate alternative to breastmilk.  Families are targeted by an industry that spends millions of dollars annually to advertise.  They invest heavily in misleading unsuspecting audiences and unfortunately, the payoff is great. According to Companiesandmarkets.com, baby foods and infant formula market is projected to reach about US $2.3 billion by the year 2015. 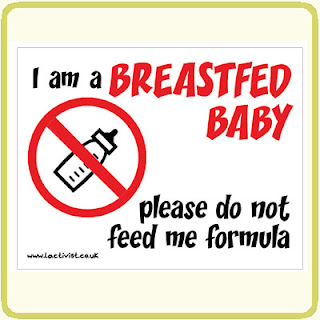 There's an entire history of formula that hopefully I will be able to write about later.  But in a nutshell, formula was just that a "formula" concocted to sustain life in a moment's notice--in emergencies when a mother was unable to provide breastmilk and a wet nurse was unavailable.  It was a scientific breakthrough and an incredible contribution to the medical world.

History does not only repeat itself in regards to formula advertising...it practically mimics the tone and inflection of each word as noted in this 1920s ad. 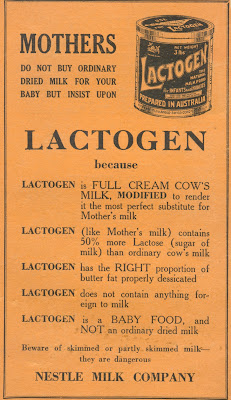 I like to compare infant formula to Total Parenteral Nutrition (TPN). TPN is nutrition given via a catheter when a person cannot tolerate food.  There are risks of infection, blood clots and other complications.  It is not ideal, but is a legitimate substitute in dire circumstances.  As useful and necessary as TPN is, a medical professional would never say, "TPN is easier than preparing food and it has all the ingredients that food has, so you can just TPN feed."

I hope my point comes across graciously.  I know there is a place for formula (artificial baby milk), but its place is not in the gut of a baby when it is not medically necessary.  There is a hierarchy of infant feeding that begins with mother's own milk, goes through the list of donor milk and finally ends with formula, but make no mistake, formula does do it's job at sustaining life, and the "formula" has improved over the years. I don't think the formula product is the real culprit in our battle to encourage breastfeeding or to educate moms, but the advertising techniques and the misleading information being promoted is what we must expose and combat.

My next posting will undoubtedly contain several photos and formula labels depicting the false advetising, but as a sample, I will demonstrate some "misleading" advertising on the new Enafamil Premium box...the side of the box boasts: "New! Natural Defense Dual Prebiotics for digestive health.  Enfamil Premium provides these three proven* benefits...

The front of the box mirrors these statements: 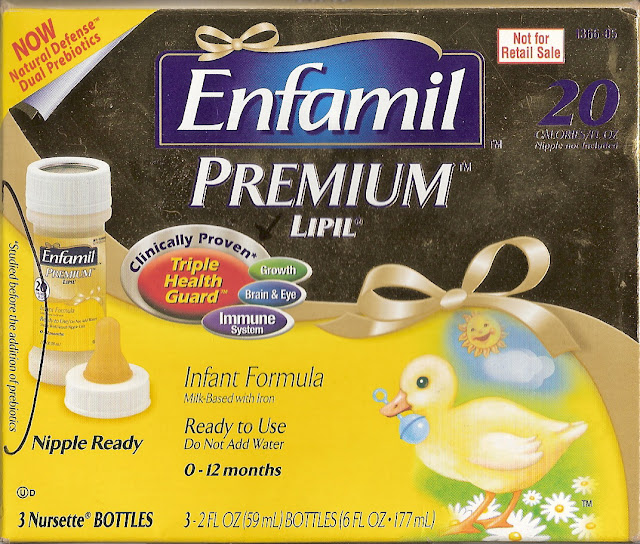 The discerning individual will trace the asterisk (*) and try to locate the information that expounds on the study, one must look hard to locate the additional information...kind of like "Where's Waldo"...not only is it small print, but it also lays at an unnatural angle.  People read left to right and would naturally turn their head to read the statement, but the clever (well planned) placement of the note forces the reader to turn the box upside-down to solve the puzzle...yes, this is strategic.  Also, the phrase "Natural Defense" is a trademark, it does not mean that this formula has an actual natural defense, the trademark name suggests the like, but once again it is strategic advertising. Even the packaging and labeling attempt to lure consumers.  The new packaging is a gold, metallic box with the name "Premium." posted predominately on the front. Just a glance across the supermarket shelves reveals that a savvy advertiser has this box shouting, "Pick me!"

Another aspect of advertising would be the violation of the WHO Code, once again something that needs mentioning, but would constitute another writing segment.  There is some good information already in print about the Code and how it is being violated on a regular basis by formula companies.  Jump over to the 24 page pdf of the WHO Code of Marketing of Breastmilk Substitutes to read the original Code, then dive into some of the blogs and articles showing how the Code is violated on a regular basis.


My favorite media clip of the Code violation was created by some of my GOO Students as a class project this year.  They used the "CSI" approach and arrested a can of formula for being in violation of the Who Code and announced that the formula was going to be put in the "can."  I had it posted on my site for awhile, but lost it over time...great concept though...someone needs to hold the companies accountable.

This part may get a little off track, but what about Fair Advertising, violations of the WHO Code and class action litigation, and the National Advertising Division's involvement with regulating advertising?  Well, STATE COURT CLASS ACTION SETTLEMENTS:  A PATTERN OF ABUSE AND A
PROPOSED SOLUTION made the following observations and cited the lawsuit Free v. Abott Laboratories

Every year, thousands of class actions are filed in the United States – the vast majority in our state court system.  The attorneys who file these lawsuits purport to represent thousands or even  millions of allegedly injured individuals.  But too frequently, the interests of the supposedly
injured parties are not really represented at all.  Instead of pursuing the interests of their supposed clients, the attorneys strike a deal under which the money ends up in their own pockets– rather than the hands of the supposedly injured parties they claim to represent.  The result is more and more class action filings, concentrated in certain state courts, and a growing pattern of settlement abuse.

In this infant formula antitrust action, the district court concluded that the proposed settlement was neither fair, nor adequate, nor reasonable, because members of the class would receive no more than four to six dollars (a tiny fraction of the $4.3 million dollar settlement) each, while their attorneys would receive $1.5 million dollars.

Even when these companies have to "pay the price" they pay it to the pockets of attorneys and the media rarely considers the rulings newsworthy.  Exposure of lawsuits, recalls, detrimental chemicals found in formula, bug parts discovered in powdered cans--all need exposure and media attention on a regular basis, not just as a means of promoting breastfeeding, but to scrutinize formula for mothers that trust it to nourish their young.  Accountability is always a good thing.
Posted by Christy Jo, IBCLC, RLC, CLE, CCCE, CD